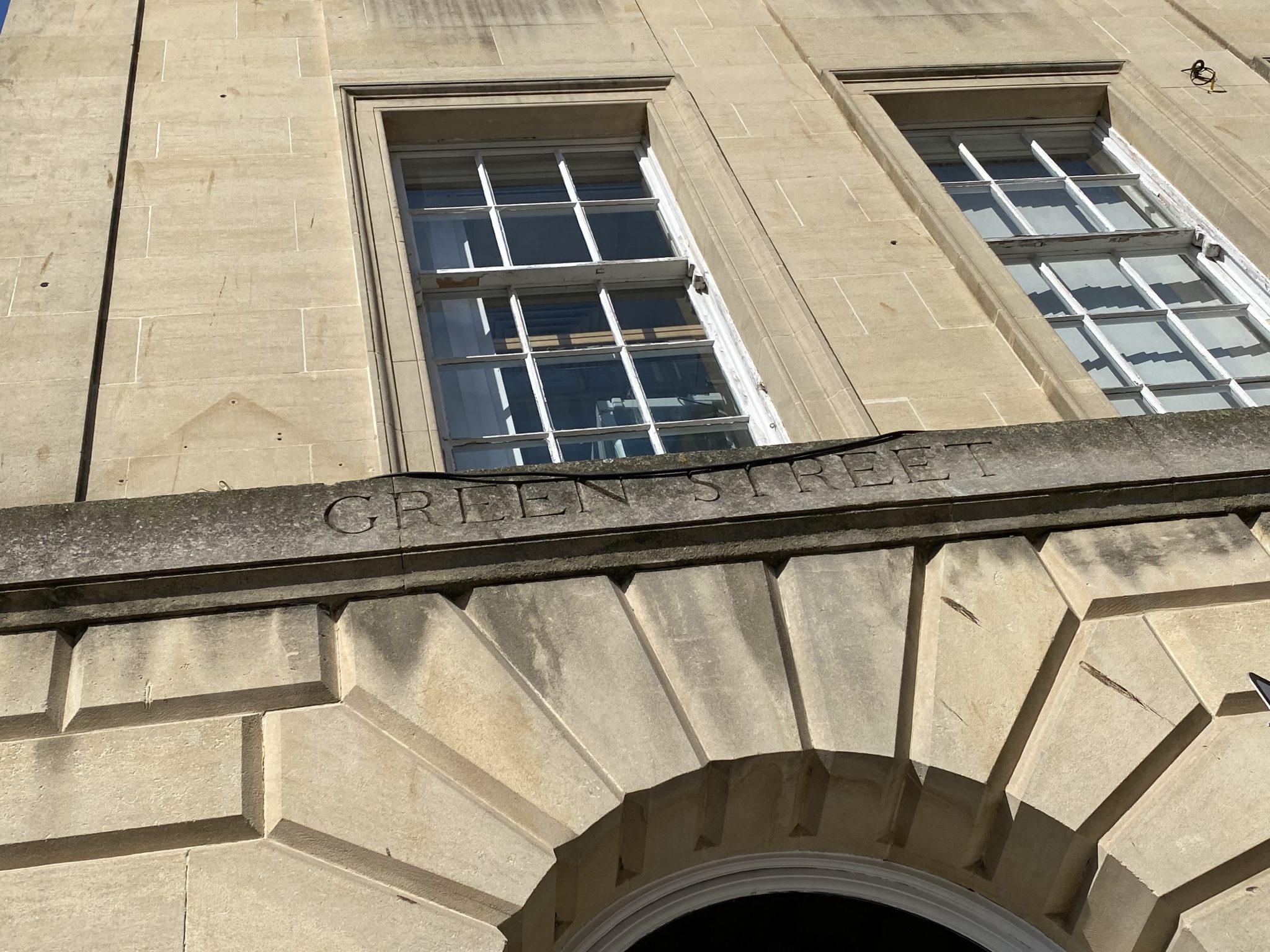 “They had the pleasure of assuring her that Bath more than answered their expectations in every respect,” writes Jane Austen in Persuasion, when describing protagonist Anne Elliot’s experiences as she visits her father and elder sister, who have taken residency in the Somerset city.

And fast forward more than 200 years from when those words were written, I could say the same – about my weekend away in the city and its retail scene’s green focus.

I’ve adopted the habit of exploring the shops whenever I go somewhere new to gauge the prominence of recycling and other greener services. London’s West End showcased lots of this in its flagships, refills, recycling points and take-back schemes were very evident at Bluewater shopping centre, and even in Milan there was plenty of eco thinking to see in the city’s stores.

And based on these experiences I had high expectations of Bath. I wasn’t disappointed.

A tour around the city’s Milsom Street, George Street, Stall Street and New Bond Street indicated to me that we’re closing in on a situation where it is just as likely a mainstream retail store will have a green service on offer to customers than not. With such efforts by the retail industry to put plastic packaging recycling in store, or clothing take-back programmes on the shop floor, attention needs to start turning towards educating shoppers to use them every time they take a trip to the shops.

Here’s what I saw in Bath. Once again the caveat is that I didn’t go in every shop, but hopefully what I’ve documented provides some inspiration about how the wider retail world is incorporating greener retailing practices into its real estate.

Independent formalwear retailer Suave Owl on Milsom Street had a sign up outside highlighting its “Reclaimed” service, whereby consumers are offered money off a new purchase if they donate an old suit. Store credit of £10 is given to those bringing in an old waistcoat, £25 for a suit jacket or blazer, and £40 for a matching three-piece suit – assuming the items in question are in decent condition.

The shop then sells these donated items second-hand for a discounted price, helping keep garments in circulation.

In @suaveowl, a single-shop indie on Milsom St, there was a sign outside highlighting how the retailer provides discounts off future purchases if customers deposit old formalwear. The collected suits are sold second-hand, providing a more affordable option for consumers pic.twitter.com/BAWAIg6B2L

Meanwhile, a bit further south in the city, Joules had its clothing take-back scheme in operation. The initiative is run in association with Oxfam UK, and aims to keep materials out of landfill via recycling or charity resale.

First up, @Joulesclothing had an in-store collection for old clothing. Run in partnership with @oxfamgb. pic.twitter.com/OA3aov5Z8t

L’Occitane went big on its greener initiatives in what was only a small store on New Bond Street.

What I liked about this shop was how obvious its plastic packaging recycling service was. Many of the retailers that offer such schemes hide them towards the back of the store so you only know they exist if you’re a regular or you happen to enter the premises, but that’s not the case with L’Occitane in Bath.

There’s also a growing range of refillable products on the shelves.

As already tweeted, @LOCCITANE_UK in Bath goes big on the sustainability message. The plastic packaging recycling collection point is clear and obvious from the window (unlike all the other shops I visited). There’s also a significant (growing) collection of refillables pic.twitter.com/mER3U8IgvZ

It was good to see the Space NK recycling scheme in action next door too. We’ve covered it on these pages – the beauty company is working with Handle to tackle plastic pollution and has collection facilities in every store across the UK.

Space NK also adds the “Recycle – Reduce – Reuse” logo to its front window, putting the green message front and centre of its brand.

We’ve covered this one in detail on @GreenerRetail – all UK @Space_NK stores are working with Handle to collect and repurpose old beauty product packaging. Bath store no different. Big label on outside window encouraging consumers to think more circularly pic.twitter.com/gk4UaBnfo7

Down Stall Street en route to the main Bath spa and abbey tourist attractions, Molton Brown focused a lot on its green messaging. There was also a “Recycle & Be Rewarded” collection point that explained to customers how bringing in old empty Molton Brown bottles of at least 300ml in size can result in a 10% discount on their next purchase.

In @MoltonBrownUK customers can dispose of their old Molton Brown containers. There’s 10% off a next purchase for those who bring back a 300ml bottle or multiple bottles adding up to 300ml, acting as an incentive to recycle as much as possible ♻️ pic.twitter.com/NKDFYlmQah

B-Corps and library of things

Outdoor equipment retailer Finisterre has a prominent position on Milsom Street, close to the city’s famous Jolly’s department store and opposite Mulberry, Reiss and OKA. The certified B-Corp organisation is built on its eco message, and the store highlights its repair service and other commitments to being a green option for consumers.

The company also works with Reskinned, which collects old items of clothing from the brand and breathes new life into them before finding a new home for the goods. Consumers can access this service online, send off their garments and receive discounts on future Finisterre purchases.

In certified B-Corp @finisterre’s Bath store the repair service was well marketed on a display board inside. The B-Corp “product, environment, people” promise was also well highlighted throughout pic.twitter.com/13jFn4JtnP

And heading north on to George Street, I found Share and Repair Bath, which is a charity organisation that encourages consumers to use its “library of things”. Strong messages around repairing goods and reusing them are found on the window and inside the store of the organisation, which runs repair cafes in Bath and north-east Somerset in an effort to cut waste and make people think more sustainably.

“Library of things” organisation @ShareRepairBath had a prominent spot on Bath’s George St. Messages touted include “borrow don’t buy” and “share and repair”. The charity shop has sustainability at its core pic.twitter.com/AA7Q9F6FDi

Having these two stores in the heart of the city was encouraging to me, as it shows circular thinking is becoming more mainstream in the UK. The more these sort of shops appear, the more likely people are to use them, right?

As is the law, retailers selling electrical goods need to offer services to take back old electricals equipment.

I’ve spotted the signs in Next before, but the only homeware/electricals shop I visited in Bath was Lakeland – and I was pleased to see it provided a prominent sign explaining to customers about this policy.

Legally, if you sell electrical products you need to take them back and help recycle them. And Bath’s @LakelandUK store had a clear sign saying as much behind the till point. Staff seemed well versed on the subject too pic.twitter.com/ZO79osjOF5

As I mentioned, I didn’t go in every store in Bath. That would have taken some effort, and I had Jane Austen’s footsteps to track before heading home.

However, I did venture into Reiss, Mountain Warehouse, Russell & Bromley, Dr Martens, Clarks, and Skechers – none of which offered any greener retailing services, or at least not obviously.

According to shop staff, it’s a case of watch this space at Reiss. I’ll be chasing up with the team there to see what’s on the agenda. In Mountain Warehouse, I was told they didn’t do any take back locally, while the four footwear retailers I visited didn’t have any messaging about recycling or reuse anywhere to be seen.

Nevertheless, a tour around Bath has added to my positive attitude about the retail industry’s efforts to be greener.

We just need to get consumers using the services on offer now. This is all part of retail – and society’s eco awakening – and I’m certain there’s much more to come.

Not sure where my next stop is for a greener retailing tour, but stay tuned to Green Retail World to find out.