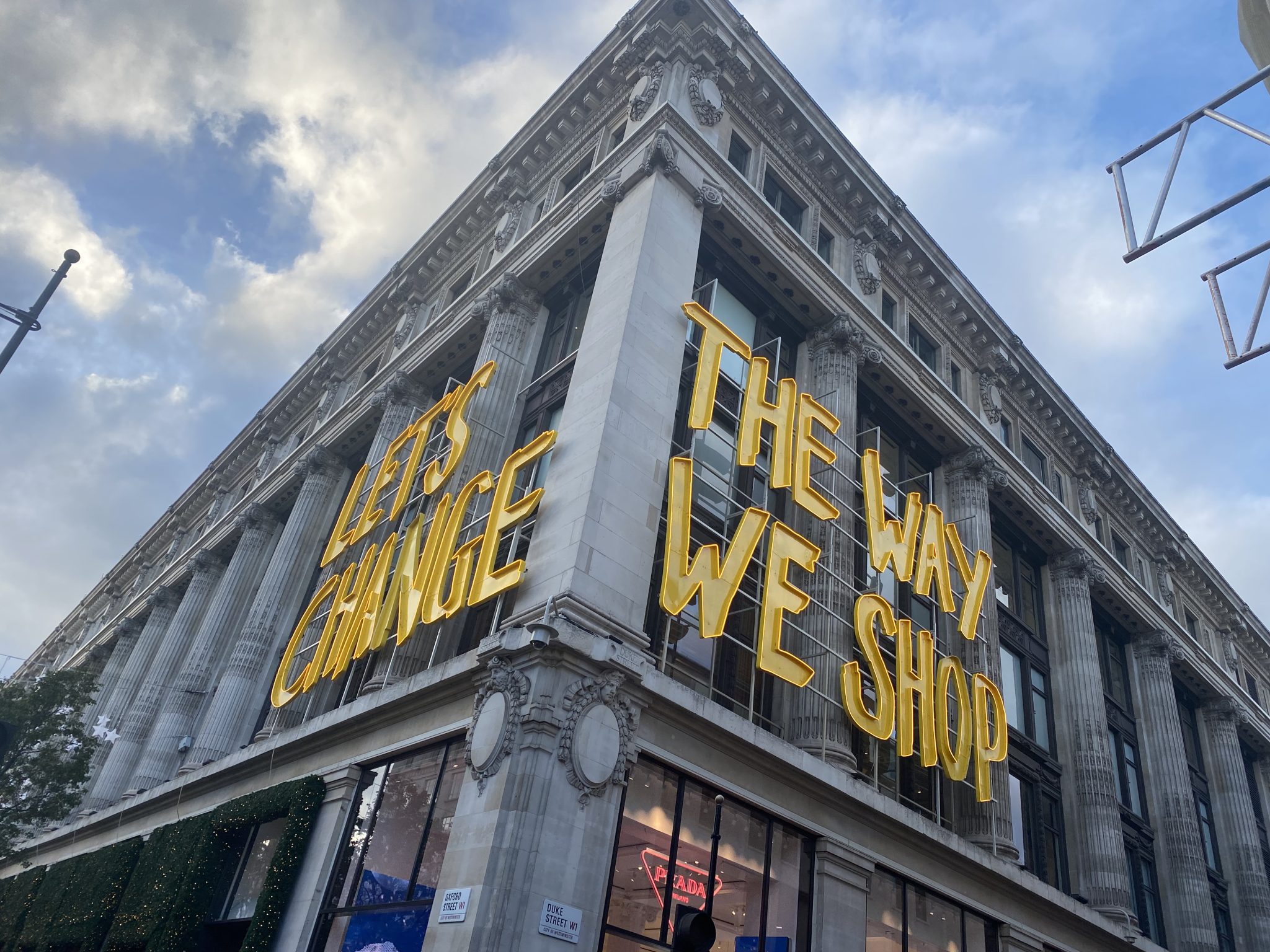 Last week I was in London to host an in-person event for the first time since March 2020.

It was all quite exciting. Very novel after such a long time doing these things remotely.

Afterwards I thought I’d check out in person some of the greener retailing practices I’ve written about on Green Retail World over the last year. It was also an opportunity to discover some new ones.

So off I went, starting on Long Acre, weaving down to Tottenham Court Road, and then on to Oxford Street.

What did I see?

It’s over for the year now, but every October Barbour offers customers £50 for their old wax jacket to put towards a new one. The retailer repairs and resells, or recycles the goods received.

Barbour also has a general repair service, clearly marketed in the Long Acre store, which neatly fits in the with the mood of the time to encourage customers to increase the lifespan of their items.

On the greener retailing trail today. Every October @Barbour offers customers £50 for their old wax jacket to put towards a new one. Materials get resold/repurposed. It also has a repair service too – items get ‘patched up’ in South Shields manufacturing facility @GreenerRetail pic.twitter.com/gAqVeIaiQH

In May, Made.com announced a partnership with French second-hand marketplace Geev, which involves the retailer encouraging its customers to list their old furniture on Geev when they buy new items.

However, there was no clear promotion of the partnership in its Tottenham Court Road showroom. I may have missed it – it was a fleeting visit after all – but I thought it might be more visible.

In keeping with the mood of the times, though, there was a green retailing message in a prominent position on the wall. I haven’t explored in detail the extent to which Made is living by these values, but you’d hope the way of operating described in the below image will become the norm for all enterprises.

And @madedotcom talking a good game in store. No obvious marketing in the Tottenham Court Road showroom of the retailer’s recently launched partnership with ‘circular’ marketplace @GeevOfficiel pic.twitter.com/PXd1li13Xy

It’s clear sustainability sells in retail right now. Question marks remain about the true green credentials of products made from old plastic but, at the very least, the idea to clean up some of consumerism’s mess by repackaging it into new products is a noble one.

This concept was evident in the stores of both value chain Primark and luggage retailer Samsonite. The former announced a big sustainability strategy in the summer, and it was encouraging to see it relaying that messaging to consumers in store.

Following @primark’s recent ‘sustainability’ announcement, it’s good to see the customer messaging in what is a slick-looking store in Tottenham Court Road (haven’t been in one for a while – this has a decent CX). The retailer’s made its commitment; now needs to follow it through pic.twitter.com/l20voFIxr1

Green agenda front at centre @MySamsonite – a growing number of ranges made from recycled plastic. The messaging is prominent in the window, as retailers realising ‘sustainability’ sells pic.twitter.com/qGexTjekGc

Of course, there is a lot more for the fast/value fashion sector to do to even get close to being classed green. But the conversation is firmly on the boardroom table now, big strategies are rolling out – and pressure and regulation will surely mount on retailers to practice what they preach in the aftermath of COP26, currently under way in Glasgow.

Down the major retail thoroughfare that is Oxford Street, I managed to visit Lush, Boots, Timberland, Moss Bros and Selfridges – all retailers we’ve covered in detail on the pages of Green Retail World in recent months.

Huge amounts of green messaging in store @Timberland_EU London Oxford Street, and also prominent positioning of @souls4solesUK donation point. Giving old footwear a new life. Timberland has been a big talker (with some action) on green issues for a good period of time now pic.twitter.com/QRi5UKITwQ

Encouragingly this is a longer thread than I was expecting (sorry to non-retail followers). @MossBros promoting its new subscription rental service in Oxford St store – albeit not great comms on it from store staff (perhaps some work to do bridging online-store divide) pic.twitter.com/oCCcpWhE49

Good to see @LushLtd prominently highlighting its Bring it Back scheme (https://t.co/FlBJVizSEC) in London Oxford Street. Has the potential to be transformative this one – could attract consumers to the brand, knowing all black pot packaging is recycled at dedicated facility pic.twitter.com/w75hHjTUzO

Many of the initiatives we’ve written about were on show, including Lush’s ‘Bring it Back’ scheme, highlighted in the image above, which pays consumers for returning used Lush cosmetics black pots before recycling the material into new packaging. All very circular.

The Boots Scan2Recycle scheme, shown in the image below, is one of the most accessible retail recycling schemes and available in 700 stores across the UK, but it was tucked away in the corner of the health and beauty retailer’s Oxford Street shop. Having spoken to many of key players behind the initiative, I’m bought into this scheme’s potential – so I’d love to see it have more prominence. Perhaps that will come.

First one I’ve seen out in the wild. Boots’ Scan2Recycle scheme (supported by Metrisk & @ReWorkedGB). Thought it was quite hidden away (London Oxford Street) but hopefully being marketed well online/on email. More info in my @ComputerWeekly feature coming later this week pic.twitter.com/cM49UOzg8f

Drop in the ocean

Although it’s great to see these big companies’ individual commitments to embedding greener processes into their operations, I’d say my trip to London’s West End was a bit of an eye opener as to how small a part the more circular elements of retail play in the everyday process of procuring and shifting goods.

Excuse the eco-related pun, but the recycling, reuse, and repair elements are a mere drop in the ocean when considering the rampant consumerism evident down every street and in every store I entered as I battled the half-term footfall.

On the positive side of things, it’s worth saying a few years ago I wouldn’t have seen any of these initiatives. So I guess that’s progress. And I think 2022 will be a year when some retailers remodel entirely to cut out the more wasteful elements of their business.

With the ongoing COP26 event starting to address the systemic change required in business and society to maintain the health of the planet, an increase in greener retail has to be a direction of travel. And I’m confident it will be.

In terms of my own shopping activity, I decided to buy something at The Toy Project pop-up within Selfridges, shown below. An early Christmas gift for the little one – and one which will give a vintage toy a new lease of life.

And finally to @Selfridges. After all the retailer’s chat about more circular thinking I was actually a tad disappointed in the small(ish) area dedicated to ‘Project Earth’, albeit prominent on ground floor. @theTOYprojectuk Xmas pop-up a welcome addition in the toy dept, though pic.twitter.com/LE26mpDROX

*Update on going plastic-free in the bathroom

My blog from a couple of months ago focused on my efforts to go plastic-free in the bathroom.

At the time, I’d just started using Wisdom’s re:new bamboo toothbrush, Faith In Nature’s shampoo bars, and Garnier’s Ultimate Blends shampoo bar, as well as PÄRLA’s toothpaste tabs which come in a glass jar and get replenished in compostable bags.

So far so good on that front – the products are doing what they are supposed to do.

I’ve just started using Lush’s moisturiser that comes in the brand’s aforementioned recognisable black tubs, which as I’ve noted are recycled by the retailer if brought back into store after use.

Shaving wise, I haven’t worked out my strategy yet, but I have just added plastic-free deodorant to the collection, purchasing Pitt Balm from Freeyourpitts.com via The Zero Waste Company store in Tunbridge Wells. The little tin can be refilled at the shop once used up – this will require a dedicated change in behaviour and routine to fit in the regular trips to top-up, so let’s see how we go.

I’ll let my friends and family be the judge of the deodorant’s quality. If I don’t hear any complaints, I’ll conclude that it’s a green – and practical – addition to the bathroom shelf. If people start making comments about my personal hygeine, I’ll get back to the drawing board.