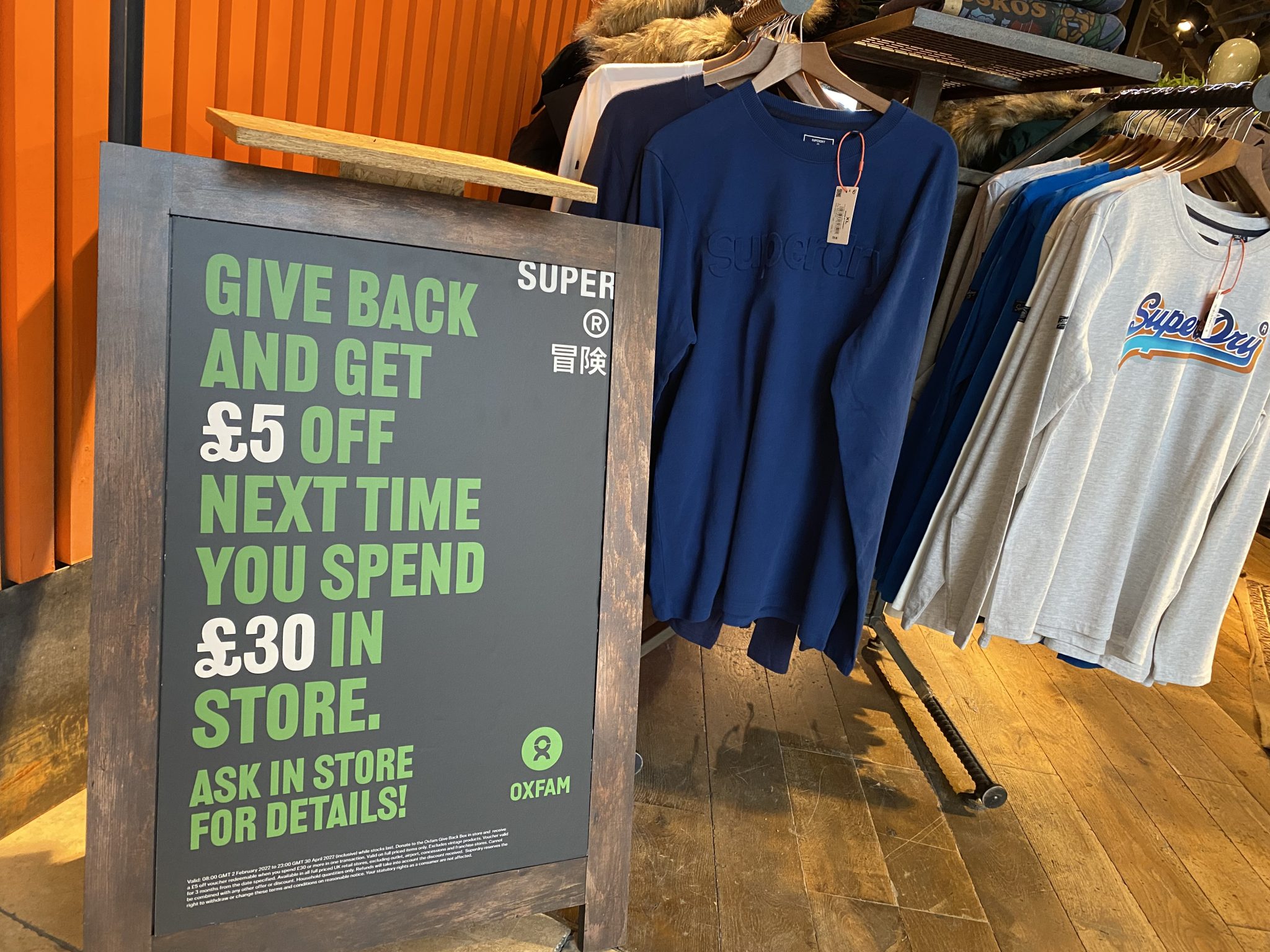 Following some decent feedback on my greener retailing tour of London’s West End, I thought I’d take the concept outside the capital.

It’s a good way of taking a look, in the field, at what’s actually going on in the UK’s shops with regard to the eco initiatives and environmental services we’re reporting on here at Green Retail World.

I’ve did the same thing during a recent trip to Milan, and encouragingly what I saw there mirrored some of the things I’ve spotted in the UK. I’ll put out a separate blog on Milan later in March.

So, what did I see in Bluewater, which is one of the largest shopping centres in the UK?

Firstly, I should acknowledge that I didn’t get around the whole centre – I was merely conducting a whirlwind tour of the upper level while I killed some time waiting for a ‘Fit to Fly’ Covid test. Nevertheless, the schemes and services I saw filled me with confidence that the retail industry is committed to becoming more circular in its thinking.

The only issue is, how much are customers actually using the facilities on display? I didn’t capture any customer in the process of using one of the recycling services, but I appreciate that is an unscientific approach and I will be seeking usage figures from retailers in due course.

We covered in this publication that 2022 was going be a big year for the refillables scheme at The Body Shop, so it was good to see one of the stations out in the wild at Bluewater.

In 2021, circa 400 of the retailer’s global shops installed the facilities, which allow shoppers to come back with used packaging to refill shower gel and the like. And in 2022 the same number again are expected to follow suit.

Situated right at the front of the store, the service is clearly being used as a customer attraction and a point of differentiation for the business.

Last year @TheBodyShopUK said it was putting refill stations in 400 stores globally in 2021 and another 400 in 2022. Here is a new one at Bluewater, allowing shoppers to bring in their refillable aluminium bottles and refill cosmetics/soaps to avoid purchasing more packaging pic.twitter.com/qQwUACkWXh

Superdry founder & CEO, Julian Dunkerton, has publicly called sustainability “a guiding principle for Superdry, both as a brand and as a business” as the retailer aims to sell greener products and run greener operations.

In its Bluewater store, the ‘Give Back’ scheme was well marketed at the entrance, although the actual drop-off point was slightly disguised at the till point while staff dealt with various general customer queries. Some off-the-rails items were placed on top of the pre-loved clothing collection bin, but hopefully that was just a temporary issue while staff tended to shoppers.

The greener retailing scheme, run in association with Oxfam UK, is all about encouraging consumers to pass unwanted clothing on to others rather than throwing it away, where it may end up in landfill – and it was good to see the initiative given pride of place in this busy shop.

On to @Superdry, which has made some big sustainability-themed announcements lately. Right at the front of the shop is an ad for its Give Back scheme with @oxfamgb, which incentivises consumers to avoid throwing unwanted clothing away. Items are collected next to the till point pic.twitter.com/TFOBSbJFHW

I swung by H&M to see if a retailer that always talks a good game in terms of greener retailing actually made the efforts in store to promote these eco-related services.

Sure enough, at the men’s till point upstairs (I didn’t check the ladies’ section), there was a collection point for clothing. H&M takes clothing from any brand – and interestingly they were using the greener retailing service as a way of encouraging membership sign-up.

Any H&M loyalty scheme member can get points for recycling, which they can put towards future purchases, and the retailer is starting to market that quite prominently – certainly in this store.

Next stop, @hm. Which collects old clothing from any brand, promising items will be recycled, reworn or reused. As an incentive to get people signed up as members and tapping into consumers’ green sensibilities – the retailer offers members digital vouchers if they recycle pic.twitter.com/y19VU6oDWa

Now the lights are on in Hollister stores (remember when the retailer arrived in the UK and the stores were all dark?), it was quite clear to see the retailer’s big message on sustainability.

One of the key starting points in this retailer-consumer environmental awakening we’re going through is for businesses to commit to transparency. Retailers need to say what they are doing and guide their customers to the information at every opportunity in order to drive changes in consumerism.

I was going to make a joke about not being able to see any green initiatives in @HollisterCo. But the joke doesn’t work now its stores no longer sit in darkness. What I did spot was a big message signposting consumers to find out more about the retailer’s eco-focused work pic.twitter.com/wZZCNGYOQy

Now I wished I had some coffee pods with me to use the recycling machine in Nespresso. I didn’t have any as I’ve started drinking Grind coffee at home because – the company tells me – the pods are compostable, so I put them in the food waste bin.

But the cleaning and recycling machine in Nespresso is a great example of the fabled in-store theatre we hear lots about while covering this industry. It’s an imposing looking machine and takes up quite a bit of square footage in what isn’t a huge store.

Nevertheless, it’s important it’s there, as it shows Nespresso – which also provides a from-home-pod-pick-up-service in some parts of the UK – has recognised it is crucial to offer services that take back the packaging it puts out into the world.

Coffee in pods is convenient but not ‘green’. However, @NespressoUK has in-store collection points allowing consumers to bring back used pods for cleaning/recycling. The process forms part of the CX too. N also collects pods from people’s homes, helping divert them from landfill. pic.twitter.com/IqQjoLWAIA

I wanted to visit Pandora to see how the jeweller was marketing its lab-made diamonds, which it has marketed heavily in recent months as part of its sustainability strategy. Sure enough, information was easily accessible.

Valentine’s Day this week, so many will have dipped into @PANDORA_Corp. Last year, the retailer said it wouldn’t sell mined diamonds and switched excl. to lab-made diamonds as part of a sustainability strategy. The ‘Brilliance’ collection has pride of place in the Bluewater shop pic.twitter.com/28UdA4O0DZ

One of the many things I’ve noticed since launching Green Retail World, is the outdoor equipment and clothing retailers are among the biggest environment advocates – and it makes complete sense of course.

These businesses perhaps more than any other have a vested commercial interest. Climate change will impact the outside world and therefore these retailers feel a heightened responsibility to do what they can to protect it – there are several schemes and coalitions to this end.

Anyway, right at the front of what was a deep store off the beaten track of the upper Bluewater floor, Snow + Rock told consumers they could get money off their next purchase if they recycle old items.

“Give your unwanted gear a new lease of life” is the message welcoming customers into the @SnowAndRock store. Like several of these take-back schemes, money off new clothing is the incentive for shoppers to use the service pic.twitter.com/tBsfmObanA

So there you have it. It was great to see lots of these services out in the field.

My aim is to check for them wherever I go and report on them. Hopefully by doing that, more retailers will start to adopt facilities of this nature and more environmentally-friendly strategies in general.

And as they do, it will surely drive more consumers to follow suit. It’s a push-pull situation here – both retailers and consumers need to drive change, and together the industry will become a greener one.

Look out for the greener retailing tour of Milan blog, coming soon.