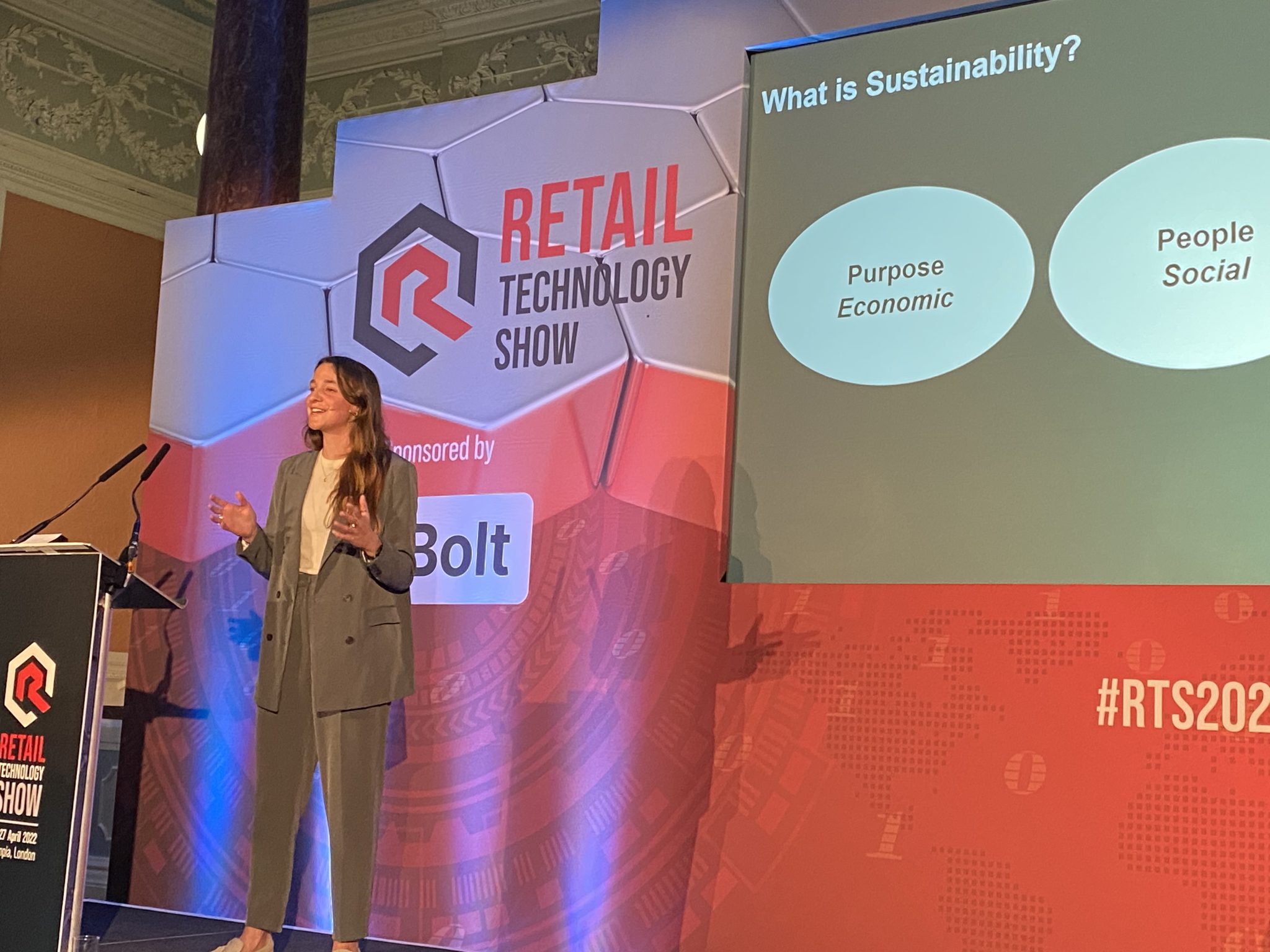 Understanding what customers wants from sustainability, and putting metrics in place to start driving change are key factors to consider if a retailer wants to kick-start their sustainability strategy, according to Morrisons’ Hannah Fox.

The senior property manager who is focused on energy strategy was talking at the Retail Technology Show in London last month, and she said getting colleagues and suppliers on the sustainability journey is a vital move to make. Fox also advised retailers to quickly establish metrics on current carbon emissions because it will enable them to be clear where they can make the biggest impact.

Fox gave a whirlwind summary of the Morrisons’ sustainability strategy during her presentation to a packed headline theatre at the London Olympia-hosted retail event, which attracted nearly 7,000 industry professionals in total over two days.

Morrisons’ sustainability strategy comprises purpose, people, and planet focus areas, according to Fox, who described the latter pillar as “how we’re tackling the climate crisis, carbon targets, reducing food waste, reducing plastic where needed, introducing recycling, and generally having a good understanding of our supply chain”.

Morrisons announced last year that most of the power generated from its solar farm – which is set for completion by 2025 – will be channelled straight into the supermarket chain’s stores and sites across the UK.

It also brought forward its commitment to reach net zero carbon emission status from its own operations – with the company aiming for this by 2035 rather than 2040 as it had earlier stated.

The Morrisons’ sustainability strategy update also revealed the retailer is committed to reducing its wider ‘Scope 3’ emissions across its entire own brand supply chain – by 30% by 2030, and it is already working with suppliers to support them in this move.

Reflecting on tackling emissions targets, Fox noted: “Scope 1 and 2 is lot easier to track [because retailers probably can access real-time data on energy and fuel used]. That data is a lot easier to manage. It’s the data points of moving products around – on pallets etc – that’s going to be a big learning.”

During the talk, Fox said there are multiple ways Morrisons can tackle food waste, which is a recognised significant contributor to carbon emissions in the UK. Morrisons already partners with apps, Too Good to Go and Olio, for example, to redirect would-be wasted food to people who need it in local communities across the UK, but the property manager said a dedicated focus on optimising stock control, packaging and consumer education also supports this agenda.

Fox said Morrisons’ sustainability strategy needs to roll out in line with what its customers want.

“Each year we listen to a lot of customers on what sustainability means to them. The top results have stayed pretty consistent – selling affordable food, supporting British farming and ensuring food safety.”

She added: “It won’t be a surprise that plastic reduction, recyclable packaging and food waste have also consistently been in the top ten.”

Bringing customers and staff along on the journey is a goal of the Morrisons’ sustainability strategy, noted Fox, who despite underlining the seriousness of the climate crisis was generally upbeat about the concerted focus being paid to eco improvement across the business world.

“We’re constantly on a journey to become a more sustainable retailer,” she said, acknowledging it is not a straightforward job.

“Sometimes you might think it’s a good thing removing packaging but then that product goes off within a day – that’s not the right decision to make. You need to spend time before you launch something so we’re not frustrating customers on this journey.”

Editor’s blog: Tesco, M&S, and the ongoing war on plastic