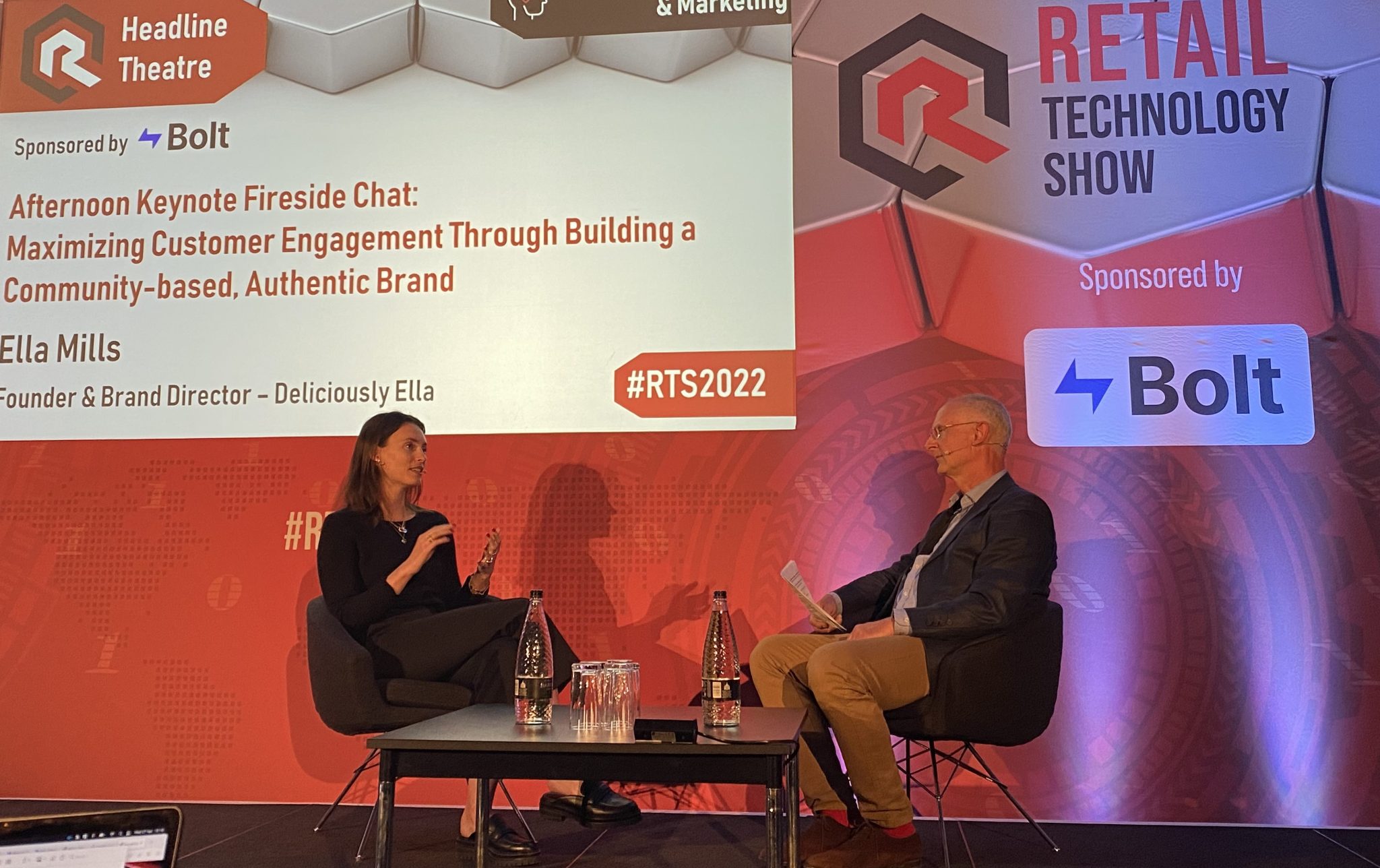 Deliciously Ella founder: ‘We need a frank conversation about what we eat’

Retailers have been told society needs to change its relationship with and attitudes toward food – and predominately plant-based and natural ingredient diets are a step towards a more sustainable and healthy society.

That was a key message from Ella Mills, founder of healthy food and lifestyle brand, Deliciously Ella, when speaking at the Retail Technology Show in London last month.

In a wide-ranging conversation at Olympia with retail analyst, Chris Field, Mills explained about her brand’s journey which started in the form of a blog in 2012 before morphing into the launch of an app, then a wide-selling recipe book on healthy eating in 2015 and now involves plant-based meals stocked in some of the biggest retailers around.

This year the brand is entering Austria and Germany for the first time, while the roots to expansion in the US are also in the process of being established, Mills explained.

But from someone who started blogging about food and diets when ill in her early-20s and got better after changing her diet to a predominantly plant-based one before building her brand, it was perhaps unsurprising she had strong words on the importance of food provenance and healthy eating.

“Fundamentally we do have to change the way that we live,” she told delegates at the annual retail showcase, which organisers said was attended by 6,850 retail industry figures over two days.

The Deliciously Ella founder said that the pandemic has put “a huge spotlight on the NHS” and its capacity, arguing: “If we want to save the NHS we’ve got to reduce lifestyle-related diseases.”

From an environmental perspective, she added that changing what we eat as a society “is impactful”.

“I do agree passionately that this is the direction we need to go in. We need a frank conversation about what we eat in this country – but it’s a really difficult conversation to have in light of the rise in living costs [and] food poverty crisis [which] is incredibly real.”

Although sensitive to the aforementioned societal challenges, Mills reserved here ire for packs of sausages that can be purchased for as little as £1. “That can’t be ethical or moral, you cannot have sustainability [in that circumstance],” she noted.

“Ultra processed food is a lot cheaper than real food and if we’re going to shift our health we’re going to have to shift our eating patterns. How we do that in the economic climate we’re facing into? I don’t know the answer but I do think these are conversations that need to be had.”

Speaking on the tenth anniversary of the brand’s launch, Mills said by building a community via the blog in the first instance, Deliciously Ella had procured 100,000 people to sell to before a product even existed. She also indicated that she is seeking a first social media manager this year – until now, Mills has managed all the company social media accounts herself.

Mills acknowledged “there was absolutely no strategy” at launch, admitting her blog launched as people were just starting to read up on alternative diets online in greater numbers. She was also one of the first people to use Instagram to talk about food and plant-based diets, but now the site has a plethora of information of this nature.

“We caught a new wave of people,” she explained of the timing of Deliciously Ella’s launch, although she admitted to feeling uncomfortable about entering the limelight at a time when she had just left university and was not expecting it.

“No-one in their early-20s can be a guru,” Mills argued, contradicting some of the media headline at the time.

A decade on – and with a growing global audience and customer base supporting the brand, as well as wider recognition of the power of plant-based diets and the importance of food provenance in terms of the health and environmental agenda – there are many commentators who would argue that guru is a fair description for the Deliciously Ella founder.