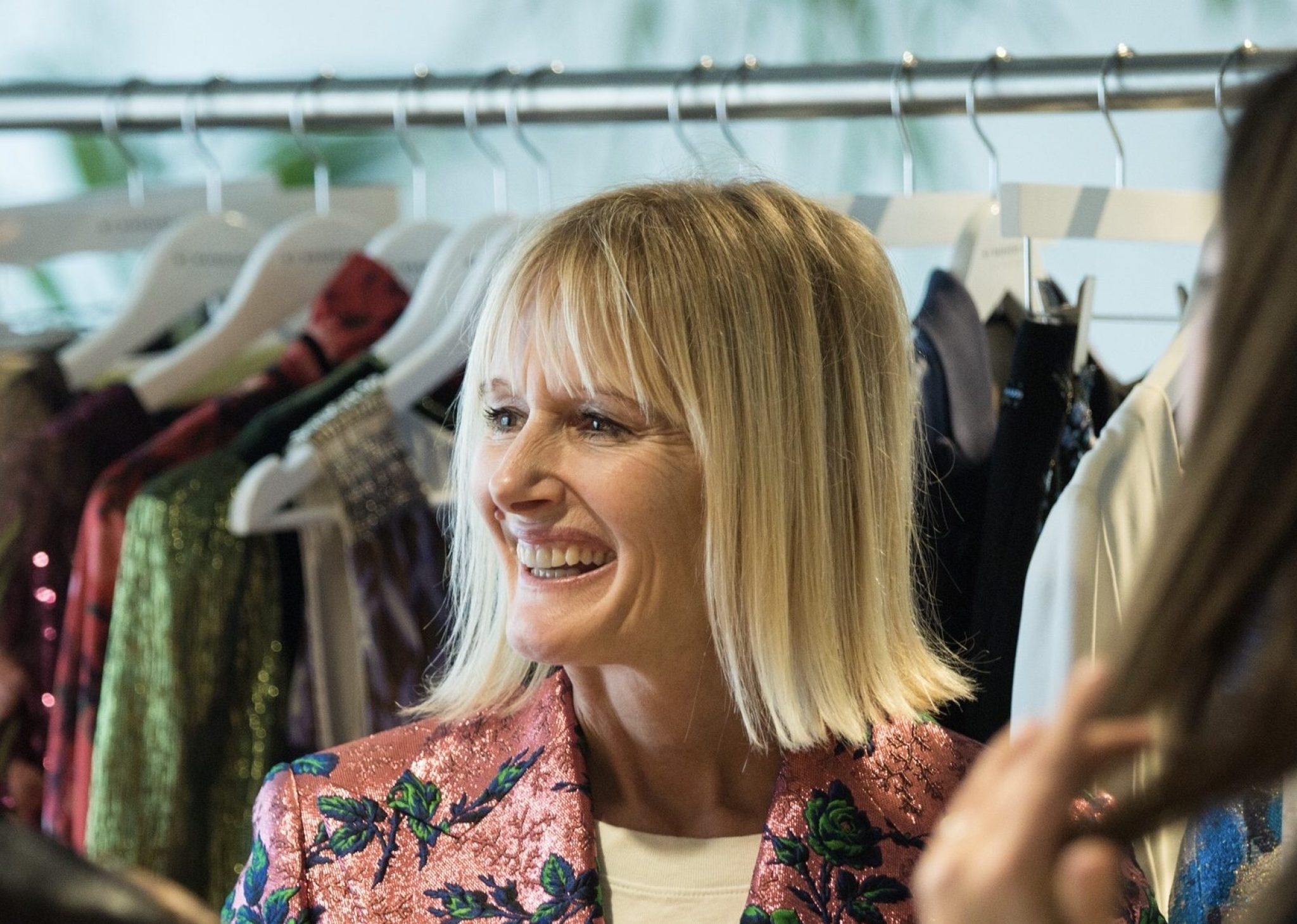 A new series where we talk to the individuals and companies helping retailers become greener businesses – highlighting the tools, technologies, and options available to support a change in environmental focus.

At the end of the two-part BBC2 documentary, Trouble at Topshop, which aired this week, Jane Shepherdson offers a word of warning to all retailers.

“You have to be aware there’s always somebody doing something, creating something, making something more interesting somewhere else that’s going to come and compete with you,” says the former Topshop brand director.

“So it’s your duty to keep these things moving on. You can’t stay still because the world isn’t staying still.”

The words are pertinent in relation to the demise of Topshop, a business she departed in 2007 when it was at the height of its powers but which disappeared from the high street after parent company Arcadia fell into administration in a smog of controversy in 2020.

Shepherdson’s comments are also hugely relevant in terms of the reinvention of her own career. After quitting Topshop towards the end of the noughties – a decade when the retailer dominated the UK high street fashion scene which is documented in glorious detail by the BBC – she took co-ownership of Whistles and led it for eight years.

When leaving Whistles, she experienced something of an environmental epiphany. She now chairs the burgeoning British luxury fashion rental platform, My Wardrobe HQ, and is director of the London Fashion Fund.

“It’s bizarre looking back because at the time we didn’t look at the environmental impact at all.”

She tells Green Retail World, she is looking to help change the narrative in fashion for the good of the planet. The sector’s negative impact on the natural world is clearer than it has ever been, and having played a role in glamourising fast fashion when it seemed perfectly acceptable to do so, Shepherdson is looking to shape a better fashion future.

“I do look back and think we spent years trying to make fashion more compelling, more exciting, and to exceed our customers’ expectations all the time,” she explains.

She adds: “I feel naïve saying that now, but nobody really did at the time.”

Shepherdson acknowledges that developing compelling garments, and making people buy “beautiful” and “exciting” well-designed items they perhaps did not know they wanted is the essence of the fashion world – and it is what she loves. But she is adamant this now needs to be achieved with the health of the planet in mind.

“After leaving Whistles I thought I have to find some way of using the experience I have gained to try and change the narrative or move the dial slightly and try and find ways of enjoying fashion that is still OK.”

My Wardrobe HQ is part of that shifting of the dial.

What is My Wardrobe HQ and who are its partners?

My Wardrobe HQ (MWHQ) was launched in 2019 by co-founders Sacha Newall and Tina Lake, with a focus on allowing consumers to rent luxury items. It offers a range of premium brands customers can hire for a fraction of the recommended retail price.

Shepherdson came in as chair to help onboard brands and use her industry connections to help MWHQ build its presence, and while navigating a global pandemic the platform has started working with the likes of Burberry, Tommy Hilfiger, and Jigsaw, supporting these brands’ ambitions to provide a rental proposition for their own consumers.

Hirestreet and Hurr also operate in the fashion rental space, serving different demographics but still promoting the idea of circular fashion. It’s a fertile space, and Green Retail World is tracking the sector.

MWHQ, specifically, has two core functions – one is curating designer or luxury brands on its website that visitors to the site can choose to rent or buy. The other is providing a white label service to retailers and brands enabling them to run their own rental service using the MWHQ infrastructure.

It is the latter which is “probably going to be the biggest part of the business”, according to Shepherdson, who talks up the MWHQ logistics and reverse logistics infrastructure as “its biggest strength”. This week, the rental platform has secured a partnership with re-commerce platform provider, Trove, too, which will help it take its European brand partners to the US market in an eco-conscious manner.

The chair, who when at Topshop was hailed as the most powerful woman on the high street as the retailer’s profit grew more than tenfold to £100 million-plus in her time leading the brand, views rental as “one plank in the bridge” of shifting fashion attitudes.

“The message we’re trying to get across is that you don’t have to own something.”

“Everything leave a footprint – I would never say rental is perfect, it is not,” she explains.

“I very much feel there is no point using a stick, you have to use a carrot to offer people some sort of alternative to the way they live their lives. It’s not successful making people feel bad about themselves and that their choices are wrong – the thing to do is to offer them something that is just as exciting.”

The chair says there is an opportunity with rental to help women, in particular, feel the same “transformative effect” associated with traditional shopping but with a lower footprint.

Shepherdson, who very quickly brought prestige and commercial success to what she describes in Trouble at Topshop as a previously “naff” brand, acknowledges UK consumer interest in clothing rental has grown at a slow pace. Certainly when compared to Rent the Runway in the US, which she credits with making rental “so easy and accessible”.

“People are nervous,” she explains, although she suggests “it only takes one rental to make you think ‘wow that’s easy let’s do it again’”. The pent-up wedding demand post Covid-19 pandemic has helped the fashion rental market, she adds.

“We have seen a huge number of people coming to us for the first time and renting for weddings.”

Shepherdson’s comments on rental in 2022 and her time at Topshop which began nearly a quarter of a century ago, highlight the jump in fashion’s environmental awareness.

So what would her ex-Topshop boss – the business magnate Sir Philip Green, whose retail legacy has been called into question in the aftermath of Arcadia’s collapse and other controversies – have thought about the rental revolution?

“He may well be right but who cares, it’s not all about making money as I used to say to him many, many times. But people like him don’t understand anything other than money.”

She argues that seeing Boohoo selling items for £1 and the rise of Shein as one of the most powerful players in the fashion world today is difficult to swallow in terms of providing a positive eco assessment of fashion’s direction of travel. But she also has much cause for hope through her work at the publicly-funded, London Fashion Fund.

Through that initiative, start-ups greener fashion ideas are given support. Some of them have secured deals with major multinational retailers, others are gaining traction by educating consumers about repair and reuse, and talking up “clothes for life” rather than garments as throwaway items.

“It makes me optimistic – we see these small start-up businesses with the most incredible ideas particularly on the line where fashion meets science,” Shepherdson explains.

Some concepts might be over the top, but others should work given the right support and they can make the world a better place, she adds.

Shepherdson reserves less favourable comments for those running the UK at present, calling the recent Conservative Party government decision to undo the ban on fracking as “dispiriting, sad, and pathetic”.

“You think why not try to lead the world instead of being at the back of the queue?,” she says.

“There are so many innovations in terms of renewable energy, so many places we should be investing – and fracking is not one of them. Why are they so old fashioned? Can’t they look to the future? If they want investment in this country we need to look to the future, and not the past.”

With Shepherdson’s decorated history in fashion, it’s difficult not to reflect on her past – our readers can watch the BBC documentary to learn more about that. But the MWHQ chair is also future-looking, and is helping the sector move forward in a greener way.

At Green Retail World we are giving greener retail champions, like Jane Shepherdson and My Wardrobe HQ, a chance to explain how they are helping retailers become greener businesses. Please contact editor, Ben Sillitoe, if you’d like to put yourself forward for an interview on this key subject. Sharing good practice can help the wider sector move in a positive direction.