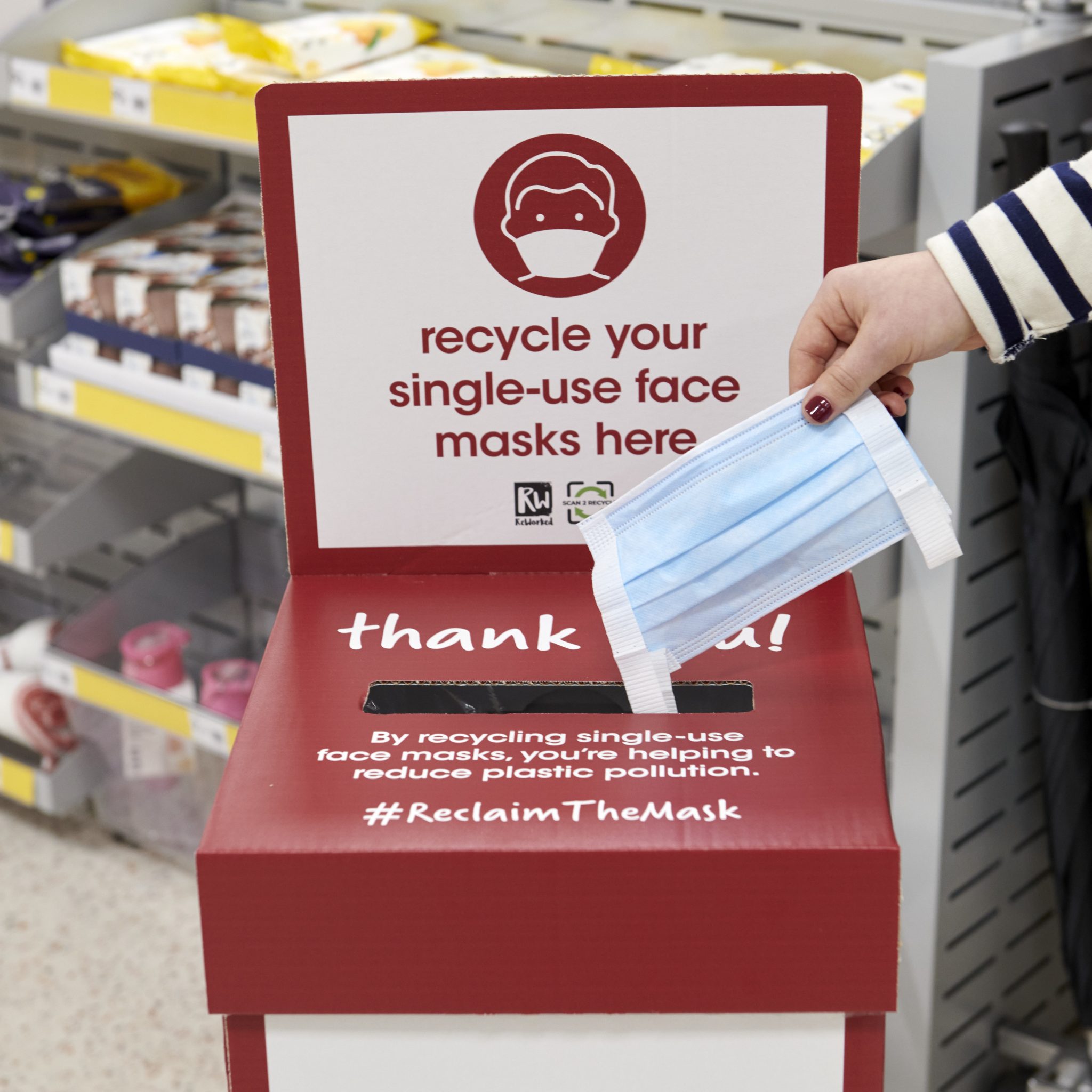 Wilko’s decision to introduce disposable face mask recycling collection points in its stores across the UK was a particularly noteworthy announcement from last week, I thought.

Firstly, because single-use plastic face masks have become the new litter problem, ending up in country hedgerows and littering the canals and town centres of more urban areas since the onset of the pandemic.

North London Waste Authority (NLWA) research released at the turn of the year estimated 102 million single-use face masks were being disposed of each week in the UK, with many finding their way into waterways and, ultimately, the oceans.

A second reason the general merchandise retailer’s move stood out is because the company tasked with collecting the waste is familiar to me. Hull-based Reworked (more on them, below) collects the masks before breaking down the plastic into raw materials, which is then used to build outdoor furniture, boarding and other products.

Wilko will start providing the face mask recycling points in stores from 1 April, as part of a three-month trial.

I typically use the reusable face coverings but there are still several masks hanging around my car and house that need binning, so the new recycling option certainly gives me an additional reason to visit my local Wilko shop when I next get a chance.

I wouldn’t be surprised to see other retailers follow suit with similar schemes, as all so-called non-essential shops are permitted to open their stores again from 12 April. There’s a huge focus on greener retailing at the moment as pandemic recovery plans are established, so it can’t be ruled out as a way of driving footfall.

This monthly blog always gives me chance to discuss some of my own personal experiences of greener retail.

In previous blogs you will have read about the biodegradable bags I received my click & collect shopping in from Aldi (also offered by Co-op), my washing machine being taken away for recycling by AO, the Pura plastic-free baby wipes we use, and other good stuff.

Well, this month I bought one of Reworked’s recycling boxes, which I can fill with the sort of plastic that usually ends up in the bin: crisp and confectionery packets, no-longer-needed kids plastic toys, soft plastic food wrapping, and other hard to recycle waste.

At the point the container is full, which I’m imagining will be in about three months’ time, I will ring Reworked and ask them to collect it, thus keeping all those items out of landfill.

I like it. These type of collections for soft plastics are starting to appear for free in supermarkets, as reported by Green Retail World, but before these fee-free collections become widespread I’m happy to pay for the service.

In tandem with marketing company, Metrisk, Reworked is also working with Boots to collect used beauty packaging in stores nationwide. It is a company making a difference in retail circles by reworking would-be waste and, at the very least, delaying its end of life.

Other greener shopping moves I’ve made lately include using Grind coffee pods for my Nespresso machine. The Shoreditch-based brand’s coffee comes in compostable pods that can go straight in the food bin once used.

Interestingly, Waitrose also announced it is to start selling compostable coffee capsules this week for its own brand range. The previous capsules were made from mixed materials which are difficult to separate for recycling, but this new version is certainly a greener option for users of Nespresso-style machines.

In our house, we have also switched to Smol for laundry and dishwasher tablets. The direct-to-consumer subscription brand sends its items out in recyclable packaging, and promises several other eco benefits.

These companies illustrate there are ways of creating products with a limited environmental impact and, importantly, without compromising on quality, which makes a winning formula in my book.

It’s a different thing entirely, but it’s a shame the same can’t be said for those blue plastic face masks. Their urgent need in the pandemic meant little thought was given to the environmental impact of the material.

The NLWA is promoting use of reusable masks after its research found nearly one in five people think disposable masks can go in the normal local authority collection recycling bin. It said this mindset is resulting in increased contamination issues at recycling facilities.

In addition, 70% of those who wear disposable face masks do not realise they are a single-use plastic, according to the study.

With Wilko providing the face mask recycling facilities from the Easter weekend onwards, it shows there’s a willingness to act. I’m hoping to see more of these collection points at other retailers’ stores in the months ahead.