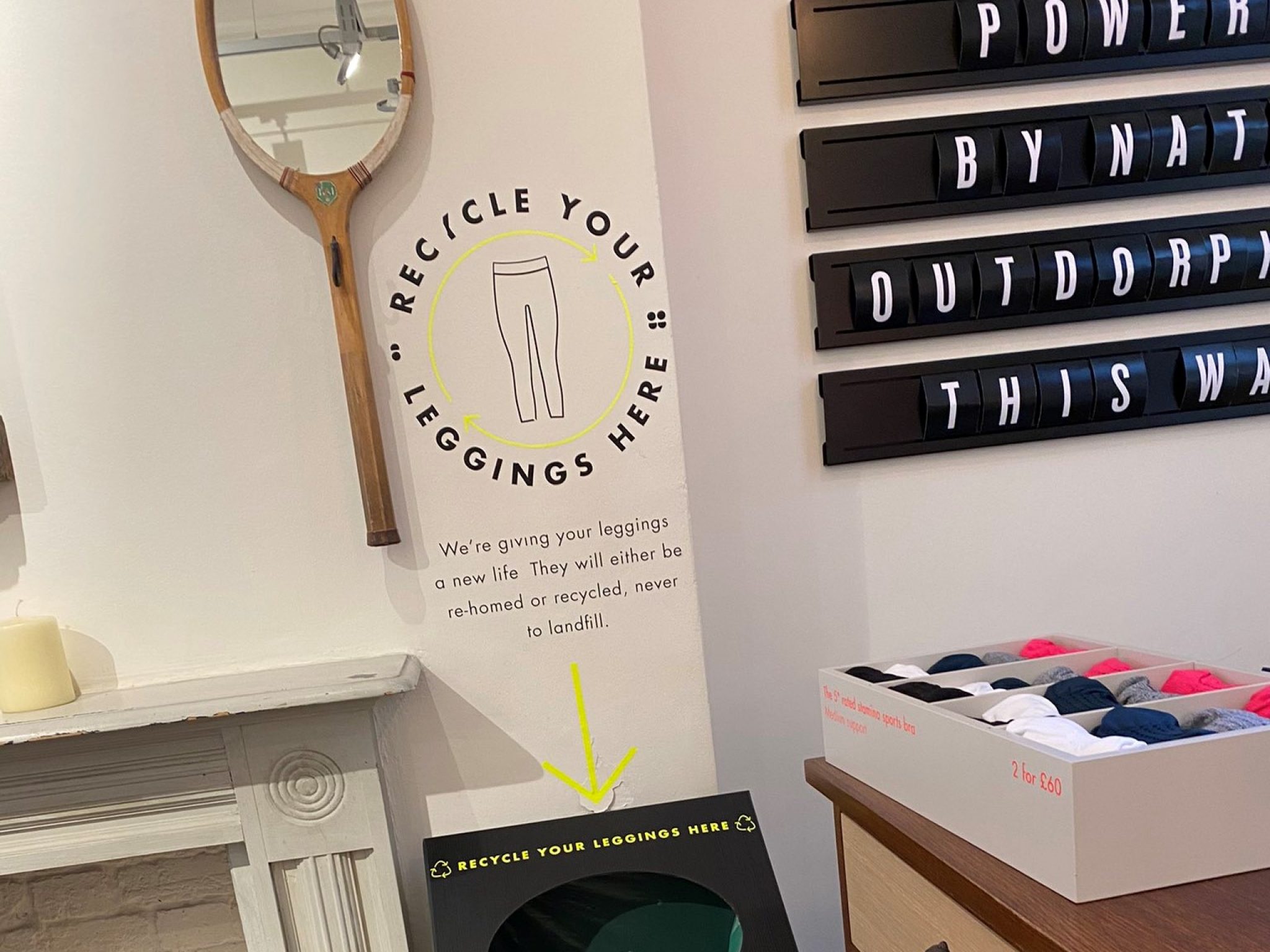 I’ve been meaning to write this for a while, and thanks to the actions of waste prevention charity, Wrap, my life has been made a little easier in terms of conveying my intended message.

Last week, Wrap published a guide for retailers about how to run clothing take-back schemes in their stores, as a way of contributing to a more circular economy.

It comes as debate around the future of the UK high street has amplified again, following the collapse of Debenhams and Arcadia (whose brands but not shops have been acquired by Boohoo and Asos) and major downsizing by others due to the pandemic.

I have a theory that the subjects in Wrap’s guide can be a central pillar to the success and re-energising of British high streets in the 21st century.

Establishing clothing take-back schemes in shops and other venues across town centres and shopping promenades has huge potential to drive footfall and provide a new way for people to engage with their communities.

As Wrap says: “Due to their reach and influence, clothing brands and retailers are well placed to engage their customers on a large scale, motivating them to act by providing easy-to-use, accessible points for textiles donations.”

If we’re all largely in agreement with legendary environmentalist and broadcaster, Sir David Attenborough, that the climate crisis is “the biggest threat to security that modern humans have ever faced”, that tells me everyone needs to act to protect our planet.

In retail, lots of initiatives have been announced to reduce carbon emissions, to increase recycling rates of unwanted clothes, to cut food waste, and to electrify fleets – we’ve been covering that on Green Retail World since the title launched last year. But environmental strategy should no longer be the side show; it needs to be embedded in everyday operations of retailers.

And one way of doing this is for the wider industry to adopt a policy of ‘we produce and sell, therefore we take back’. That is circular thinking, and with the right systems in place it could create a fresh role for stores.

My initial vision is that every retailer creates the facilities in their shops to collect back the items they sell (even other company’s items as well), with the promise to dispose of them responsibly and work with partners to recycle the goods or repurpose the material components where possible.

Let’s stick to clothing and fashion for now, as Wrap says 920,000 tonnes of used textiles ended up in household residual waste in 2017, including 336,000 tonnes of used clothing. That’s a big environmental footprint for fashion, but take-back schemes can help drive down the waste.

I’ve spoken about H&M and Sweaty Betty offering in-store take-back services in their stores on these pages before, but it should be universal – and retailers need to start shouting about it in their messaging if attitudes (and, importantly, actions) are to change.

My vision is that we get to a point where every time someone thinks about going into town, they grab some wardrobe items they no longer want or need, potentially using it as collateral for their next purchase. The same could be said for hard-to-recycle packaging, but that’s a subject for another day.

To me, this constitutes circular thinking with a commercial flavour – but it needs retailers to encourage such behaviour. Especially as a low percentage of consumers actually use the take-back facilities already on offer, according to Wrap.

Why would retailers want to do this?

I appreciate retailers might feel a tad hard done by here. After all, this is a shift in the shape of consumerism and they are left with lots of the heavy lifting (Wrap’s guide offers some really insightful stuff on how best to operate take-back schemes).

As Wrap discusses, clothing take-back schemes allow businesses to engage with their customers in new ways. If done right, they can encourage brand loyalty, thanks to the very clear example of corporate responsibility.

And if retailers make take-back a more central part of their overall proposition and marketing, it will encourage all-important footfall. We know that has been dwindling in many town centres for years, and not just because of the pandemic.

High street retailers could even build a moral story around collecting the mountains of throwaway fast fashion garments sold by the online pure-plays. It could be a way to get those who usually shop via the web into stores, helping reach new customer demographics.

Online retailers themselves offer digital-led take-back schemes, so it’s not necessary something that is going to drive people to the high street per se. But there’s a chance to be creative and build brand equity.

What’s stopping Next opening a ‘recycling centre’ store on the high street, for example, where people can bring back unwanted items, engage with the brand’s other channels, and chat to other like-minded folk about eco and community matters?

Besides being a good way of raising awareness of environmental issues, such concepts represent fresh ways of marketing to the new generation of consumers who want to shop with companies that have a social purpose and who are planet conscious.

Footwear retailers, for example, could place collection points in each of their shops and give customers money-off their next purchase every time they bring shoes back. Think of the positive impact this would have on young low-income families battling to keep their children well shod as they grow out of one pair of school shoes after another.

And on the flip side, the retailers doing this well would benefit from a loyal stream of shoppers.

I usually use this monthly blog to highlight three great examples of greener retailing. Well, you can take the aforementioned M&S, Tesco, and Zara examples as my good practice trio on this occasion.

Clothing and garment take-back can become ingrained in society if all retailers follow suit by creating initiatives that work for them and then shout about these schemes – and make them central components of their proposition.

It will help consumers, individual businesses, and the planet. And in a more environmentally-tuned society it could be one of the components that helps embattled high street communities thrive again.